Occupations of the Negroes by Henry Gannett

0
THE TRUSTEES OF THE JOHN F. SLATER FUND
Occasional Papers, No. 6

OCCUPATIONS OF THE NEGROES

BY
HENRY GANNETT,
of the United States Geological Survey
BALTIMORE
PUBLISHED BY THE TRUSTEES
1895

MEMBERS OF THE BOARD.

From 1882 to 1891, the General Agent of the Trust was Rev. A. G. Haygood, D. D., of Georgia, who resigned the office when he became a Bishop of the Methodist Episcopal Church, South. Since 1891, the duties of a General Agent have been discharged by Dr. J. L. M. Curry, of Washington, D. C., Chairman of the Educational Committee.

The Trustees of the John F. Slater Fund propose to publish from time to time papers that relate to the education of the colored race. These papers are designed to furnish information to those who are concerned in the administration of schools, and also to those who by their official stations are called upon to act or to advise in respect to the care of such institutions.

The Trustees believe that the experimental period in the education of the blacks is drawing to a close. Certain principles that were doubted thirty years ago now appear to be generally recognized as sound. In the next thirty years better systems will undoubtedly prevail, and the aid of the separate States is likely to be more and more freely bestowed. There will also be abundant room for continued generosity on the part of individuals and associations. It is to encourage and assist the workers and the thinkers that these papers will be published.

Each paper, excepting the first number (made up chiefly of official documents), will be the utterance of the writer whose name is attached to it, the Trustees disclaiming in advance all responsibility for the statement of facts and opinions.

OCCUPATIONS OF THE NEGROES.

The statistics of occupations used in this paper are from the Census of 1890, and represent the status of the race on June 1 of that year. The Census takes cognizance only of “gainful” occupations, excluding from its lists housewives, school children, men of leisure, etc. Its schedules deal only with wage-earners, those directly engaged in earning their living.

The primary classification of occupations made by the Census recognized five great groups, as follows: 1. Professions; 2. Agriculture; 3. Trade and transportation; 4. Manufactures; 5. Personal Service. These titles are self-explanatory, with the possible exception of the last class, which is mainly composed of domestic servants.

7The following table shows the proportion of the negro wage-earners engaged in each of these groups of occupations. In juxtaposition, for comparison, are placed similar figures for the native whites and the foreign born.

Similar facts are shown by diagram No. 2. In this the total area of the square represents the number of persons in the country pursuing gainful occupations. This is divided into rectangles by horizontal lines, the rectangles being proportioned respectively to the numbers of the native whites, the foreign born, and the negroes. The sub-division of these rectangles by vertical lines indicates the proportion in each group of wage-earners.

The most striking facts brought out by this table and diagram are that only a trifling proportion of the negroes were in the professions, that much more than one-half were farmers, and nearly one-third were engaged in personal (mainly domestic) service. Indeed, over seven-eighths of them were either farmers or servants. The proportions engaged in trade and transportation and in manufactures were very small. In respect to the farming class, they contrasted sharply with the foreign born. In trade and transportation and in manufactures the contrast was even greater, in the contrary direction. The foreign born contained a much larger proportion of professional men.

Comparing the negroes with the native whites, equally interesting contrasts appear. Professional men were much 8more numerous among whites than among negroes. The proportion of the farming class, although much smaller, was nearer that of the negroes than was the same class among the foreign born. In trade and transportation and in manufactures the native whites had much greater proportions, while in personal service the proportion was much less than that of the negroes.

It will be interesting to analyze these figures further. The following table classifies negro wage-earners by occupation and by sex, giving for each sex the percentage engaged in each group of occupations:

These figures are also illustrated by diagram No. 3, the area of which represents all negro wage-earners. The two rectangles into which it is divided represent the males and females; each of these is sub-divided into rectangles representing the number in each group of occupations. Of the male negro wage-earners, more than three-fifths were farmers and a little less than one-fourth were servants. The two classes jointly accounted for nearly 85 per cent. of all.

Of the females, considerably less than one-half were farmers and more than one-half were servants—the two classes together accounting for 95 per cent. of all. This large proportion of female negro farmers was doubtless made up in the main of women and female children employed in the cotton fields.

The following table, abstracted from the Census publications, shows the number of negroes in all occupations and in each of the five great groups of occupations by sex and by states and territories:

Proportion of Wage-Earners to Population.

The foregoing diagram No. 4 shows by the length of the bars the proportion which the negro wage-earners bore in 1890 to the negro population of each state. This proportion was greatest in the states and the territories of the west. Following these are the northeastern states, while the lower part of the column is made up of the states in the upper Mississippi valley and those of the south.

Occupations by Groups of States.

The distribution of wage-earners among the five occupation groups differed widely in different parts of the country. To study it, it will be sufficient to group the states and analyze the statistics of each group.

The groups which will be used here are those which have been in use in the last two censuses—namely, the northeastern and southeastern, north central and south central, and western groups. The states and territories of which each group is composed are shown in map No. 5.

Examination of the states forming the above groups will show that the groups are in many respects very characteristic. The southeastern and south central groups contain nine-tenths of the negroes of the country. These states may be said to constitute the home of the negro, while in the northern and western states he is an immigrant.

Occupations by Sex and State Groups.

Diagram No. 6 shows the distribution by sex and by groups of states of the negro wage-earners. It appears that in the northeastern, southeastern, and south central groups two-thirds of the wage-earners were males and one-third were females, while in the north central and western groups about five-sixths were males and one-sixth only were females. This is in part due to the disproportionate number of males in these parts of the country. 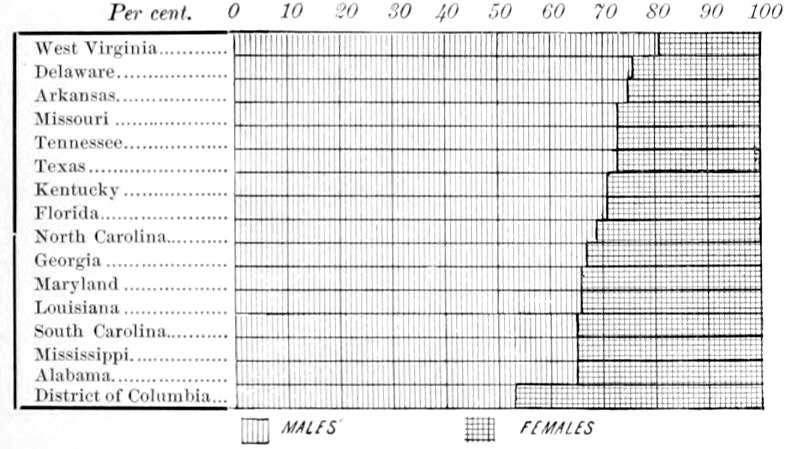 Distribution of Occupations by Sex and Sections of the Country. 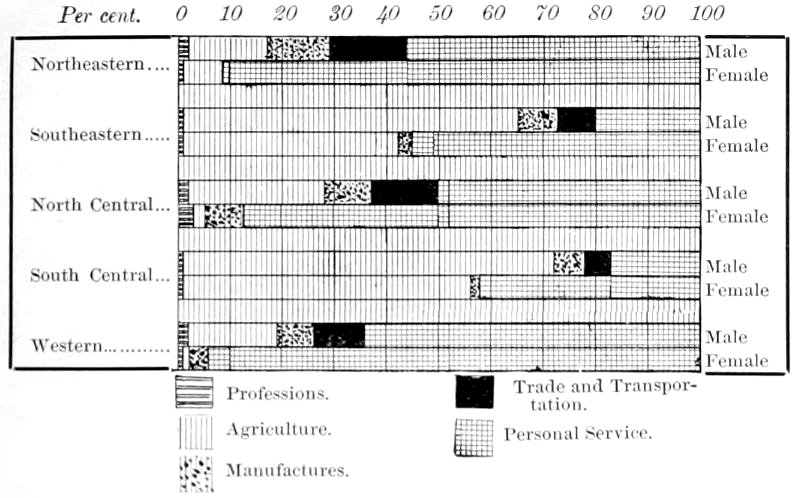 Proportions of Males and Females among the Negro Wage-earners.

It will now be of interest to extend this study in detail by states, but, in doing so, the study will be confined to the southern, the former slave states, which are, in a sense, the home of the negro, and in which more than nine-tenths of them live. In most of the northern states the number of negroes is so small that any conclusions drawn from statistics regarding them are worthless and are likely to be misleading.

Diagram No. 8 shows the distribution by sex of the negro wage-earners of these southern states. The total length of the bar represents in each case all the wage-earners, the white portion representing the males and the shaded portion the females.

Diagrams Nos. 9 and 10 present the proportion of male and of female negro wage-earners who are engaged in agriculture, personal service, and other occupations in the southern states.

Again excluding the District of Columbia, which is not a farming community, the male wage-earners who were farmers constituted in the different states proportions varying from 36 per cent. in Missouri to 85 per cent. in Mississippi. The proportion of farmers was highest in the cotton states and decidedly less in the border states. On the other hand, the proportion of males engaged in personal service was least in the cotton states and increased decidedly in those further north.

Both the diagrams, and especially the first, show an important feature. In the cotton states wage-earners were almost entirely either farmers or those engaged in personal service, but in the states farther north these classes were relatively smaller and occupations were somewhat more varied.

Proportions of Male Negro Wage-earners engaged in Agriculture, Personal Service and other occupations.

Proportions of Female Negro Wage-earners engaged in Personal Service, Agriculture, and other Occupations.

Ownership of Farms and Homes.

The statistics of farm and home ownership and of mortgage indebtedness of the Eleventh Census throw some light upon the pecuniary condition of the negro race.

The total number of farms and homes in the country in 1890 was 12,690,152, of which the negroes occupied 1,410,769, or 11.1 per cent. The proportion of negroes to the total population was at that time 12.20 per cent., showing a deficiency in the proportion occupying homes and farms when compared with the population.

Of the 549,632 farms in the country occupied by negroes, 120,738, or 22.0 per cent., were owned by their occupants. The corresponding proportion for whites was 71.7 per cent. Of course, as regards tenants, the reverse was the case, the proportions being for whites 28.3 per cent, and for negroes 78.0 per cent. More than three-fourths of the farms occupied by negroes were rented; in other words, more than three-fourths of the negro farmers were tenants, while less than one-fourth of the white farmers were tenants.

Diagrams Nos. 11 and 12 summarize the above facts in graphic form. The total areas of the squares represent the number of farms and homes respectively, those occupied by whites and negroes respectively being represented by the rectangles into which the squares are divided by horizontal lines. The vertical lines sub-divide these rectangles into others proportional to the numbers occupied by owners without and with incumbrance, and by renters.

Summing up the salient points in this paper, it is seen that in the matter of occupations the negro is mainly engaged either in agriculture or personal service. He has, in a generation, made little progress in manufactures, transportation, or trade. In these two groups of occupations, males are in greater proportion engaged in agriculture and females in domestic service. They have, however, during this generation, made good progress toward acquiring property, especially in the form of homes and farms, and, in just so far as they have acquired possession of real estate, it is safe to say that they have become more valuable as citizens. The outlook for them is very favorable as agriculturists, but there is little prospect that the race will become an important factor in manufactures, transportation, or commerce.